Blog > Biagi Bros in the Community > Purple The New Green

What’s all the buzz around the colorful new pipes at the Biagi Bros properties in the Napa Airport Centre? Some may not be aware but, purple pipes indicate they contain recycled water. This water is not potable but can be used for a variety of things from crop and landscape irrigation to industrial applications such as cooling towers and flushing toilets. For Biagi Bros the purple pipes mean an alternate water source for their landscape irrigation making their purple the new green. Not only is the grass green but the business is as green as Biagi Bros can make it. 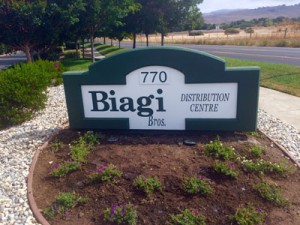 “Biagi Bros went Green, now we are going Purple. Recycled water is simply the best option for our business, it’s important to conserve during drought times and be environmentally aware for the future.”

In light of California facing some of their driest years in recorded state history, Biagi Bros has once again shown initiative and their commitment to the environment. They are the first of nine 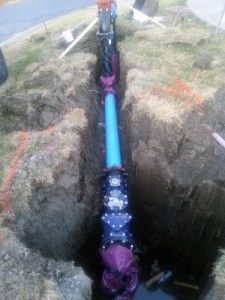 businesses in the Napa Airport Centre to quit using potable water from the City of American Canyon and use recycled water from Napa Sanitation for their landscaping irrigation. California’s regulations for water and water recycling are among the most stringent in the world and have been used as a model for other countries. In Napa County there are very strict watering protocols in effect but, Biagi Bros took it one step further with this latest advancement.

The average potable water consumption for Biagi Bros has been 2.6 million gallons per year for outdoor irrigation. The amount saved by this project will supply approximately 24 homes in American Canyon with water per year according to Jason Holley, public works director of American Canyon. Even Jeff Tucker, CFO of Napa Sanitation is excited about Biagi Bros making this change. For every gallon of recycled water being used a gallon of potable water is being conserved. This will have an incredible impact on the community and the environment! 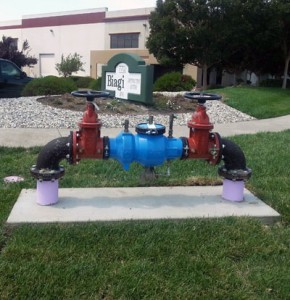 They want to encourage other businesses in their area to follow suit. Stacey Biagi-Monk, director of social media and public relations said recently, “We’re really proud of this innovative project. We want to be a leader in this kind of stuff.”

By making purple the new green, the bonus is, not only are they being environmentally responsible but also fiscally responsible. Even though this project has had an initial cost of $50,000 to connect with the recycled water system, they will save over $21,000 per year. Napa Sanitation currently charges $6.69 per thousand gallons of potable water and just $1.01 for the same amount of recycled water. It won’t take long for the savings to add up.

This project is another exciting reason why Biagi Bros continues to show their staying power in today’s market. Imagine the impact using recycled water could have on Napa County as other businesses follow suit.

If you are interested in working for a company that cares about the environment, people and a job well done in every area of life, contact Biagi Bros. Did you know that Biagi Bros has partnered with SRJC Driver Training to provide driver training for drivers wanting to get their commercial class “A” driving ticket?